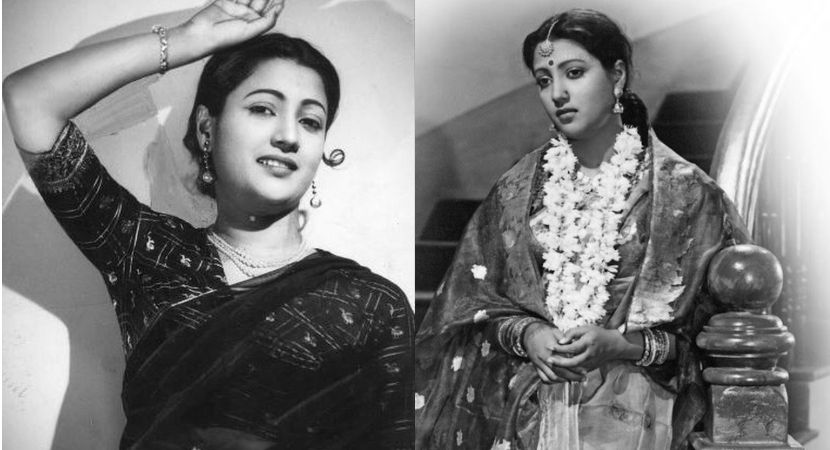 The history of the last hundred years of Indian cinema will be very unfair if it fails to remember and recognize the contribution of Suchitra Sen, one of the all-time great actresses particularly of Bengali films and at her very best even when she did a couple of good Hindi films which became and were known as great films because of her outstanding performances. Suchitra Sen is the one light that has been shining bright for more than fifty years even though she has left the limelight and has been away from films and all the frills of the world of films and has been living the life of a recluse, a world of her own built by her own feelings which only she can understand and she will never let others understand. The woman who was magic once is a mystery woman now and is already known as a myth….

Suchitra had made a grand beginning in Bengali films and given them the dignity which they had lacked for a long time. She however reached a stage when she teamed up with  Uttam Kumar , another legend and worked with him in some of the all -time great classics of Bengali cinema. The number of other films she has made immortal are legion.

She is the first Bengali actress to be awarded in an international film festival (Best Actress award for Saat Paake Bandha in the 1963 Moscow film festival). She is supposed to have refused the  Dadasaheb Phalke Award  in 2005, preferring to live in seclusion out of the public eye. In 2012, Sen was conferred with the West Bengal government`s highest award,  Banga Bibhushan .

Sen was born in  Pabna  in present day  Pabna District  of Bangladesh. Her father Karunamoy Dasgupta was the headmaster of the local school and her mother Indira Devi was a homemaker. She was their fifth child and third daughter. She had her formal education in Pabna. She married Dibanath Sen, son of a wealthy Bengali industrialist, Adinath Sen in 1947 and had one daughter, Moon Moon Sen, who is now known as an actress.

Sen made a successful entry after marriage into Bengali films in 1952 and then a less successful transition to the Hindi film industry. According to some unconfirmed but persistent reports in the Bengali press, her marriage was severely strained by her success in the film industry.

Sen made her debut in films with Shesh Kothaay in 1952, but it was never released.She was then cast opposite  Uttam Kumar  in  Sharey Chuattor , a film directed by Nirmal Dey. It was a box-office hit and will always be for launching the teaming up of Uttam Kumar and Suchitra .They went on to become the icons for Bengali films for more than 20 years. The magic of their combination cannot be compared to any other team in films made anywhere in the world. Their fans worshiped them and of course, they had critics who talked about their personal lives more than their work as artists of the highest caliber.

She switched over to Hindi films and the very first Hindi film she did was Bimal Roy’s “Devdas” with Dilip Kumar and Vyjayanthimala as her co- artists, and she received a Best Actress Award for the film. Her films ran through the 1960s and the 1970s. Her last major performance was in the Hindi film Aandhi where she played a politician with Sanjeev Kumar as her husband. Aandhi was inspired by India's then Prime Minister  Indira Gandhi and was even banned by the Government Of India because of the almost true to life resemblance between Mrs Indira Gandhi and Suchitra Sen in the film which however got Suchitra a  Filmfare  nomination as Best Actress, while  Sanjeev Kumar , won the  Filmfare Award as Best Actor. The story of Aandhi also had a striking resemblance to her own life, her husband, was an industrialist who invested a lot in her success, but later a great deal of rift developed among them.

One of Suchitra's best known performances was in Deep Jweley Jai. She played Radha, a hospital nurse employed by a progressive psychiatrist, Pahadi Sanyal, who is known to develop a personal relationship with male patients as part of their therapy. Sanyal diagnoses the hero, Basanta Choudhury, as having an unresolved Oedipal dilemma — the inevitableconsequence for men denied a nurturing woman. He orders Radha to play the role though she is hesitant as in a similar case she had fallen in love with the patient. She finally agrees and a bear up to Choudhury’s violence, impersonates his mother, sings his poetic compositions and in the process falls in love again. In the end, even as she brings about his cure, she suffers a nervous breakdown. The film is full of beautiful, often partly lit, close ups of Sen which set the tone of the film and is aided by a mesmerizing performance by her. (Asit Sen remade the film in Hindi as Khamoshi with Waheeda Rehman in the Suchitra Sen role and the late Rajesh Khanna)

Suchitra's other landmark film with Asit Sen was Uttar Falguni (Suchitra carries the film single-handedly in the dual role of a courtesan Pannabai  and her daughter Suparna, a lawyer. In particular, she is brilliant as Pannabai, bringing poise, grace and dignity in the role of a fallen woman determined to see her daughter grow up in a good, clean environment.

Suchitra as Pannabai is able to connect directly with the viewer and make him or her feel deeply for all that she goes through the course of the film thus giving her death at the end a kind of unexpected jolt. Her international success came when she won the best actress award in Moscow Film Festival for the movie Saat Paake Bandha. In fact, she is the first Indian female to receive an international film award.

She refused  Satyajit Ray's offer due to her problem with dates, as a result Ray never made the film Devi Chawdhurani. She also refused Raj Kapoor's offer for a film under the RK banner. She retired from the screen in 1978 after a career of over twenty -five years to a life of quiet seclusion. She has avoided the public gaze after her retirement and has devoted her time to the Ramakrishna Mission. Suchitra Sen was a contender for the  Dadasaheb Phalke Award   provided she was ready to accept it in person. Her refusal to go to New Delhi and personally receive the award from the President of India deprived her of that award.

She is the mother of the actress Moon Moon Sen with whom she could not get along for a long time because of Moon Moon’s bohemian lifestyle, but Moon Moon has now made peace with her mother. She is the grandmother of Raima and Rhea. Moon Moon’s daughters. The people have still not forgotten her for her fascinating and sometimes formidable performances which include some memorable films in Hindi like “Mamta”, “Sarhad”, “Musafir” and “Bombay Ka Babu”. What the future of a living legend like her will be is already a question that is being asked wherever her name as one of the all time greats is known and the answer to the question only she knows, or does she?

Saira Banu on Dilip Kumar’s 1st Death Anniversary, “I fell in love with him at the age of 12”