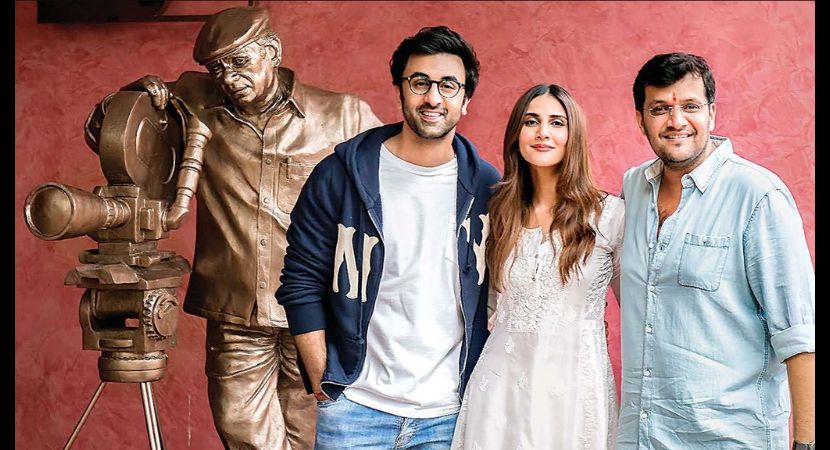 The upcoming movie ‘Shamshera’ is currently high on the promotions. The team of the film, including lead actors, Ranbir Kapoor, Vaani Kapoor, and director, Karan Malhotra recently talked about their film at a press conference in Delhi. From the characterization, and looks, to dream roles and world cinema, everything was discussed. Our Mayapuri team was also there to cover the event.

Check out the interesting questions and answers.

Interviewer: So three days are left for ‘Shamshera’ and all the action films recently haven’t done really great. So what are the expectations from the film because the advance bookings have been really great?

Interviewer: No, but that’s south. We’re talking about Bollywood.

Interviewer: But that’s the real debate right? South vs. Bollywood.

Karan: I think it’s a fabricated debate. I think the filmmaker’s conviction is winning and it’s being celebrated by the audiences. And hopefully, we are also offered the same celebration from the audience and we enjoy the same success.

Interviewer: Since you are coming after 4 years on the screen. Was it a conscious decision to choose ‘Brahamastra’ and ‘Shamshera’, both large-scale?

Ranbir: Well I think, I would like to congratulate myself that I chose such films at a time. I saw it coming that you need a big ticket film to get the audience to the theatre. You need to give them an extra little bit, an extra X-factor, to draw them in. You see this model happening all over the world.

It’s not like I would stop doing the films that I used to do but I’ll probably do it for different mediums. But if you want to pull the audience to the theatres, especially at a time like this, post-pandemic, you have to give them an experience that they will realize that ‘okay, this can be seen with the collective audience on the big screen.

It’s my good fortune and good fortune telling also, that Shamshera and Brahamastra both come in that category.

Chhavi Sharma: You have said before that you have not done such a role and now you’re doing it in ‘Shamshera’. So what kind of role would it be and what should we expect? What inspired you to do it?

Ranbir: The story and the character inspired me. It’s a surprise in the film how they find my character. Every actor brings his own vulnerability and emotions into a character. It’s there but there’s even more than that. It’s a multi-genre film. I had the opportunity to do comedy, action, romance, drama, everything.

It’s a kind of entertaining film that will engage the audience for 3 hours. It’s the kind of film where people get involved in the film’s story. That’s the kind of experience you will get from ‘Shamshera’.

Interviewer: Karan, YRF’s last adventure-fantasy, period-drama was ‘Thugs of Hindostan’. It was touted to be the next big thing but unfortunately, it didn’t. Were there any inputs from Adi Chopra regarding ‘Shamshera’? What went wrong the last time shouldn’t be repeated this time?

Karan: ‘Shamshera’ was green-lit even before ‘Thugs…’ had been released. I don’t think we’re that type of filmmaker and producer. Every film has to be dealt in a way it’s a different animal. It doesn’t make business or creative sense to carry the baggage of the fate of different films. Adi and I don’t operate out of fear.

Interviewer: Vaani, according to you, 3 things that you said yes to ‘Shamshera’? Things you will say to the audience and they will come to the theatres?

Vaani: I’ll be very honest, larger-than-life and you need a bigger pull for films like these. So I had conviction in Karan’s world of cinema. I am a big fan of ‘Agneepath’, I love its aesthetics and sensibilities. So a) was Karan Malhotra.

I love the script when I got the narration and my part in it. His narration is mind-blowing that you can get from the director. That was the second thing.

And third, I believe in my co-actors, the production house, the scale of the film. All of these things were kept in mind. And, I wanted to do something that I haven’t done before.

Interviewer: You’re in Delhi. Not many people know that you did your schooling in Delhi, and from the same school as Taapsee Pannu. Did you meet when you were in school?

Vaani: We were on the same school bus but I was such an introvert and she was very extrovert. Very outspoken and out-there and flamboyant. I was like this quiet, meek observer, not talking, looking outside the window. I barely used to talk and she was so flamboyant and talking to everyone. She remembers me like a quiet girl and I remember her as a chatty girl.

Chhavi Sharma: People are saying that your look is too modern when compared to a period-drama film. What do you have to say about that?

Vaani: I don’t think so. It’s made out of the same fabric as Ranbir’s.

Karan: Look, it's my responsibility. If people are commenting it’s on my work. But I don’t think so. When you will watch the film, it’s not a documentary or a biopic. It’s a period-drama, classic Hindi masala picture. You must enjoy it for that value. If I cover Vaani from head to toe, would you watch ‘Kaale Naina’?

She is a beautiful dancer and she has to be presented in the most effective way possible. And we tried to keep the period in mind and balance it off. Sometimes it can be off for dramatic value. You might feel that with Ranbir also. And I really believe that in a larger context, you will not think of these things. You will enjoy it for what it truly is.

Chhavi Sharma: Sanjay Dutt’s look is quite different. From where did you get the inspiration?

Chhavi Sharma: Still, you must have gotten this inspiration from somewhere?

Karan: Inspiration is something that just comes to you. There is no intellectual reply that I can give you. It’s organic. From childhood to now, I have seen so much material. Be it films, books, and different genres. One way or other, it stays with you subconsciously. Your own version gets created. So, I think there’s something that I couldn’t do in my life that I keep doing with Sanjay.

Interviewer: What is your dream role?

Ranbir: I think, a biopic on my grandfather, Raj Kapoor. That will be interesting.

Interviewer: Russia and Moscow have great fan-following for Raj and Rishi sir. After the Hollywood films ban, Bollywood is really catching up on this opportunity, bagging big screens…

Ranbir: Are they? Really? Russia? When did this happen? Is she saying the truth? Are we releasing in Russia? I have heard so many wonderful stories of the kind of love the Indian audience gives to movies and actors, Russia also does that.

I have a very interesting story that my grandfather told me. He and Nargin Ji were in Russia for the premiere of ‘Awara’ or something similar. They came out of the hall and there were a lot of local Russians waiting outside. So, both of them waved at the people and sat in the car that was taking them to the hotel. Suddenly what they experienced was that the car was not moving forward, it moved up. They carried the car on their shoulder and walked to the hotel! I still have goosebumps when I hear about it.

Interviewer: I’m sure you guys watch a lot of world cinema, other languages, and regional languages.

Karan: I watch what I am recommended. I am not a crazy fan of world cinema.

Vaani: My mother is a huge fan.

Chhavi Sharma: Not only Korean, but Turkish dramas are also there.

Ranbir: My mom is crazy about Turkish dramas. The only problem is that it has about 250 episodes. I don’t have that much time. The popular one I have watched is the Korean drama, ‘Squid Games’. Korea is really doing great in the world of art. Whether it’s K-Pop, dramas, or ‘Parasite’ the movie that came out. That country has really taken the culture all around the world. We should also take a leaf from their book.

Interviewer: Hollywood project is in Alia ma’am’s kitty. Is there anything for you?

Ranbir: No. Right now I’m not interested in Hollywood. I’m trying to keep my footing here first. I believe like we talked about ‘Parasite’, ‘Crouching Tiger Hidden Dragon’, ‘Life Is Beautiful’, I think when we make a movie based on our own culture, language and for our people and we then present it in front of the world, there’s no feeling greater than that.

The chase is not Hollywood, the chase is to make a film on your own. From your own culture, language, and people and take it all over the world.