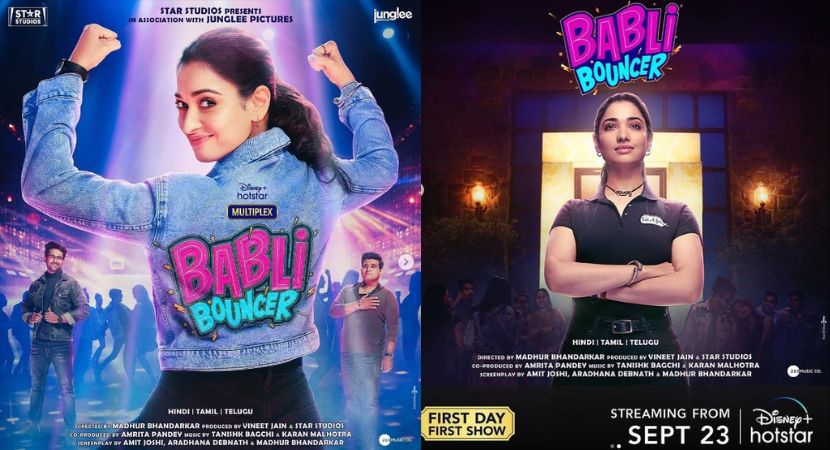 The first look of the Tamannaah Bhatia-Madhur Bhandarkar film titled ‘Babli Bouncer’ is out!

Tamannaah Bhatia is one of the most sought-after Indian actresses that works predominantly in the southern industry of Telugu and Tamil cinema. Although she has appeared in several Bollywood movies like ‘Himmatwala’ with Ajay Devgn, ‘Humshakals, and ‘Entertainment’ alongside Akshay Kumar, Bhatia is yet to make a major impact in Hindi cinema. This is the first time that Tamannaah Bhatia will collaborate with the ‘Fashion’ and ‘Heroine’ director, Madhur Bhandarkar. A few months ago, Bhatia penned down an emotional note, “Babli Bouncer for me is not just a film but an experience of a lifetime which I’ll cherish forever. This film started off with an extremely well written and author backed character, which had everything that would be the right kind of meat for an actor to go all the way and give everything that they have, to create a world and character which could make way into the hearts of audience, and that’s exactly what I tried to do with the character of Babli”. She continued “For me the most special thing while shooting for Babli Bouncer was that while we were busy shooting a film, we were also creating and living a parallel real life which was filled with goodness, positivity and people who were supportive and idealistic. This energy helped me translate my emotions on screen”. Talking about the director, Madhur Bhandarkar, Tamannaah wrote “@imbhandarkar is one of the finest directors our country has and I’m so glad that I had this opportunity to work with him on a project like Babli Bouncer. He is a director who is so kind to everyone on and off the sets and so effortless with his work. His happy ,childlike, relaxed energy really rubbed off on everyone and that helped each one of us deliver our very best”.