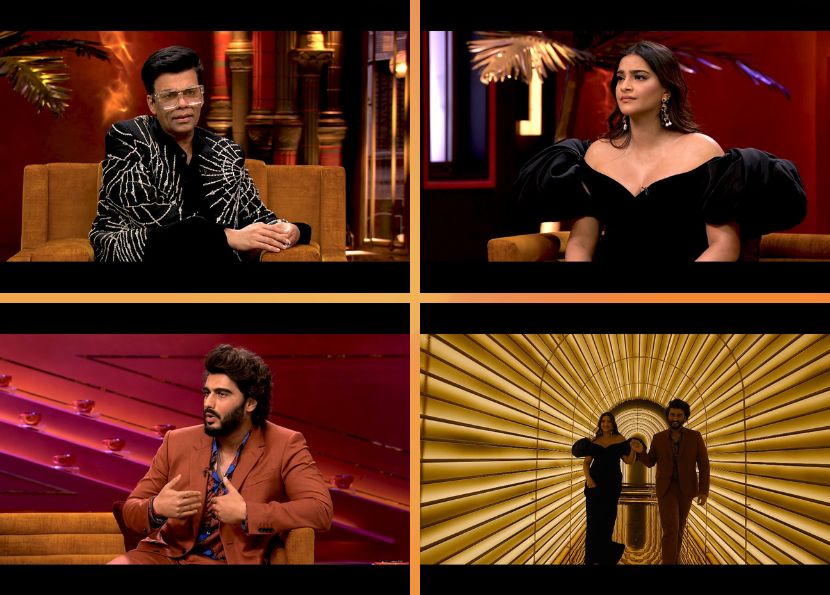 Despite her presence, this episode mostly belonged to Arjun Kapoor and his constant banter with the cousin, Sonam. From Malaika Arora to Shiva No. 1, let’s talk about some of the best moments from the ‘Koffee with Karan’ Season 7 Episode 6. One of the best moments from the latest episode was Arjun Kapoor opening up about his relationship with his girlfriend, Malaika Arora. This is one of the first times that the ‘Ek Villain Returns’ actor has talked about her. When asked “Why did you feel the need to take baby steps in bringing your relationship with Malaika out?

Sharing his own childhood struggles and relationship, Arjun said “I have lived life being on the other end of the spectrum. I grew up in a disjointed or a dysfunctional situation”. Laying the importance of easing everyone around with the idea of their relationship, Arjun explained “it is my choice to be with her but I cannot expect everyone to understand it and accept it easily”. Talking about the Cannes Film Festival 2022, Karan Johar asked Sonam about her thoughts this year. While the ‘Neerja’ actress wasn’t there to attend the festival, Sonam took a safe way and said “I have been trolled for my sartorial choices in Cannes. So who am I to say that”?

Sonam cleverly turned the table and asked KJo about his views on the Indian representation this year. The filmmaker confessed, “It wasn’t up to speed” and said Deepika was the best-dressed Indian in the film festival. He did call out those who were present but were not invited to it. When asked by Sonam how that can be possible, the ‘Kabhi Khushi Kabhi Gham’ director revealed “you can show up and start walking on the Croisette”. The Awww-worthy moment of the show was when Karan asked Sonam about her point of view on Arjun’s relationship with Malaika. He asked, “Did you feel that you needed to give him that support?” Sonam sincerely replied “Arjun and I are 15 days apart…we have always been together. So, there is a point where its love which is unconditional”.

She continued “you have to accept whatever makes the person that you love so much, happy….I will be supportive of anything that gives him happiness”. At this point, Arjun stood up to affectionately kiss his cousin for her kind words and support. One of the most hilarious part of the episode was when Sonam couldn’t recall the name of Ranbir Kapoor, Alia Bhatt starrer, and Karan Johar produced ‘Brahmāstra: Part One – Shiva’. When asked the name of the film that Ranbir is promoting nowadays, Sonam hilariously replied “It’s called Shiva, right?” She went on to say that it’s called “Shiva No. 1”.

Arjun and Karan had the time of their lives while trolling and making fun of Sonam’s ignorance. Last but the least, the Rapid Fire and ‘Koffee with Karan’ Hamper winner was Arjun Kapoor.  While Sonam is generally spontaneous and has a ‘foot-in-the-mouth’ issue, she was pretty subdued throughout the show. Most of her answers had Rhea, Anil, Harshvardhan Kapoor, and Anand Ahuja in it. Arjun, on the other hand, was much more forthcoming with his answers.

Catch the latest episode of ‘Koffee with Karan’ on Thursday, only on Disney+Hotstar. Stay tuned with Mayapuri for the latest Bollywood news and updates.