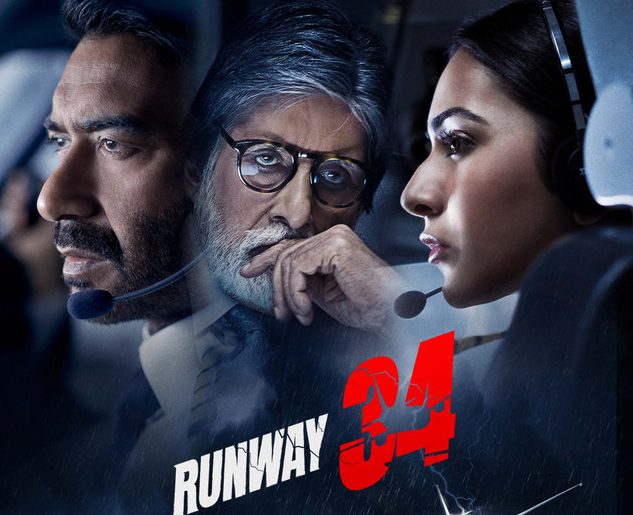 | 28-04-2022 06:17 PM 4
-Jyothi VenkateshProducer- Director -Ajay DevgnStar Cast- Ajay Devgn, Amitabh Bachchan, Rakul Preet Singh, Angira Dhar, Boman Irani, Aakaksha SinghGenre- ThrillerPlatform of Release- TheatricalRating- 3 stars Runway 34 is loosely based on the story of the narrow escape that a real life story of a flight from Doha to Kochi had way back in 2015 due to unclear visibility and bad weather conditions. Captain Vikrant Khanna (Ajay Devgn) is a high-flying pilot who is not only confident but also arrogant about his abilities, especially to handle turbulence and crisis 35000 feet above sea-level. When the flight encounters torrid weather conditions, overriding the suggestions of his first co-pilot Tanya Albuqurque (Rakul Preet Singh), not only does Vikrant change the flight’s alternate destination but eventually sends out the ‘May Day’ message just before landing the flight, a few inches shy of a crash. What sets apart this different film are its cutting-edge visual treatment of the narrative, blended by a crisp story (Sandeep Kewlani) and screenplay (Sandeep and Aamil Keeyan Khan) with no undue dramatic digressions or romantic interludes. What is commendable is also the smart utilization of VFX that brings one to the closure of the first half, and the sound and production design of the film which are the plus points of the movie. Sadly, the smaller supporting characters like the bearded aviation journalist, the irate businessman who tries to throw his heavyweight  and the guy recording the social media videos on his phone in the flight have not been dwelt within the film  even in the  in trial portions. It is difficult to pinpoint who is better among Amitabh Bachchan who plays the Aviation Investigator Narayan Vedant and Ajay Devgn who are equally well-composed and bang on with their characters. Though Boman Irani makes his presence felt he doesn’t have much scope to perform as the shrewd owner of the aircraft. Rakul Preet Singh is a delight when it comes to blending not only her emotion but also her vulnerability well to get into the skin of her character, and performs her part with complete honesty, as Vikrant’s co-pilot. Angira Dhar and Aakanksha Singh could have done with meatier parts to play around with and contribute more in detail to the narrative. To sum up, Runway 34 is a film that is out and out taut and what’s more brilliant but it is to be seen whether the film will be easily understood by the audience which is very used to the run of the mill films.
PreviousNext
Trending